Leave out the print/export for now

This page was created as an in-classroom exercise in LING 2208, NTNU 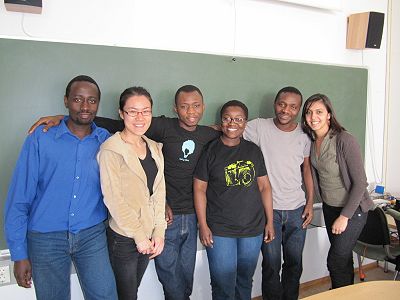 1. The simple nominal phrase consists of only the nucleus which can be a noun or a pronoun and occasionally quantifier. [1] See re-write rule and example below.

2. Complex noun phrases consist of the nucleus followed by one or more other elements of the structure. These more elements added to the nucleus are referred to as nominal modifiers. These include, adjectives, quantifiers, determiners, plural marker "wo", intensifiers. [1] [2]

2b. Complex noun phrases can also have a nucleus which is preceded and followed by a nominal modifier. In other words, noun phrases in Ewe are left-headed which on their left and right edge may host intensifiers. [1] See re-write rule and an example below.

2c. Nouns in Ewe are inflected for number. The plural suffix is ‘’wo’’ which is normally attached to nouns as a suffix. For example, Ðeviwo “children”

However, anytime there is the presence of definite (la), it contracts to ‘’a’’ and then infixes itself between the noun and its plural suffix. Eg.

4. Complex nouns exist in the Ewe language made up of different and unique morphemes. Compound words have this phenomenon. One can do a morphology of these complex nouns. See the breakdown of an example below.

The example above is made up of the noun - outside, (DEF) marker - a (this is the contracted form of la and the LOCATIVE- me

5. Some Nouns are polysemous. See examples below

Comparison of Ewe and English

6. Some noun phrases in Ewe are actually prepositional phrases in English when translated. This is interesting. Find an example below.

Le nukpɔkpɔ me la
“In the video”

In Ewe, some nouns are classified as Locative nouns. They do not need a preceding preposition before them, but follow a verb of movement directly. [2] See examples below.

7. Orthography of the LOCATIVE/POSTPOSITION me in noun phrases In one context as shown below:

The LOCATIVE/POSTPOSITION me is written as part of the main noun.

7b. In another context as shown below:

Le nukpɔkpɔ me la
“In the video”

The LOCATIVE me stands all alone; not attached to the main noun. This is so because orthographically it is allowed and again, the context for their usage is also different. In one context, it helps create a complex noun and in the other context, it behaves as a unique morpheme, standing all alone to make the phrase complete.

Other locative/postposition particles in Ewe include, dzi (top), ŋgɔ (in front of), dome (between),